The roots of Upcycle Santa Fe’s creation are grounded overseas.  It was after many rewarding experiences abroad creating alternative plastic waste management systems/festivals/structures that our Founder, Jo Stodgel, returned to Santa Fe to bring home the Upcycle gospel.  After four years of focusing on our local community of Santa Fe through educational outreach and research projects, February 2018 we returned to the overseas adventures.  We found ourselves deep in the jungle, where paved roads end and dusty paths guide you to a permaculture farm, down on the Osa Peninsula of Costa Rica.

About a year earlier Upcycle Santa Fe became acquainted with a couple of people living in the intentional community (and permaculture wonderland) of Finca Morpho.  Located in Costa Rica, our contact with those at Finca Morpho was limited, but they sought out Upcycle Santa Fe with an interest to build their own Ubuntu-Blox Press.  We provided as much digital information we had at the time, and wished them luck with the build.  It has been exciting to receive inquiries from communities overseas regarding Ubuntu-Blox!  We were curious as to what was going on down there at the Finca.  What were they upcycling?  Was the press built and complete?  Were they building structures?  And to top it all off we had one of those, “Come visit us any time!” outstanding invitations… So fast forward to February 2018, and we’re on a plane heading to Central America.

Within 30 minutes of arriving and touring Finca Morpho we decided we were going to build the community an upgraded, top-notch Ubuntu-Blox Press.  It was clear that the prototype they’d built the year before wasn’t quite cutting it, and we knew building a fresh new press wouldn’t go unnoticed in this group.  Finca Morpho is located deep in the Osa Peninsula of Costa Rica; a peninsula that is majority national park and wildlife refuge.  This is because the Osa Peninsula is the second most biodiverse place on the planet!  The plants, fish, mammals, birds, reptiles, and insects thrive in this jungle.  Protecting this natural environment for the diverse wonderland that it naturally is, is important.  Because of the intense biodiversity of this place, plastic waste has the potential to do a great deal of damage to exquisite creatures of all sorts. That was definitely part of what inspired us so much to build the Press.

We soon found a rhythm to our days.  We’d awake with the sun each morning (for the first time for as long as either of us could remember!).  As soon as the sun rose the temperature would start to climb, but also local Howler monkeys would begin to chant in the treetops as the golden morning light would dance across the Golfo Dulce and into the luscious green jungle where we slept.  It was such a spectacular moment we didn’t dare sleep through it.  Oh, yes, the glorious Costa Rican coffee may have also had something to do with it.  Next came an 8:00 am breakfast with the community members and visiting travelers.  This was always a lovely moment to catch up with everyone in the community and hear about their projects for the day; surf sessions, plant harvesting, tea brewing, music recording, etc… There was always a beautiful moment happening in whichever corner of this jungle finca you chose to look within. 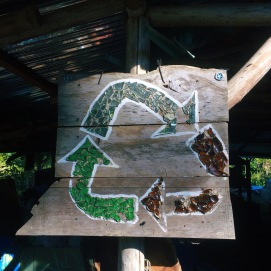 Building plans for the Ubuntu-Blox Press

For us – team Upcycle Santa Fe – our corner of this jungle paradise was at the Resource Center.  A giant bamboo structure with a metal roof which sheltered the important stations for plastic separation, compost preparation, and storage of materials that had no immediate need, from the intense sunlight and intermittent rain storms.  We built the Ubuntu-Blox Press under this structure, intuitively knowing it wouldn’t need to travel anywhere else once completed.  We spent our first two days salvaging for materials throughout the Finca.  100% of the needed wood, screws, and tools were stored in some place or another on the farm.  We later purchased two hinges and a door knob from the hardware store, but the remainder of the Press was built entirely of reclaimed materials.  Morning work hours passed quickly as the hot and humid afternoon hours heavily approached.  Temperatures in the mid 90s during the afternoon lead to extra-long lunch breaks where we’d lay low and wait for the hottest part of the day to pass.  We continued our work in the early evening hours, and sometimes after sundown.

Getting to work, sanding the wood nice and smooth so the plastic isn’t punctured by any splinters 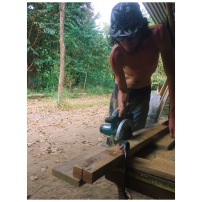 Cutting each piece of wood, as needed, to perfection.

It took Jo and I 10 days to build the Press.  During that time we’d have visitors from the finca stop into the resource center filled with curiosity about what we were building, and especially how the whole thing worked.  After a few days I began to feel the wonder I imagine a magician must feel as they continually surprise people when they pull the rabbit out of the hat.  For me, sharing with people the knowledge I have about plastic upcycling – and the many cool ways to actually do it – never gets old.  Each time a visitor would approach us with questions, it was an opportunity to share and teach.  You just never know how each person will respond, nor the capable impact each person may have in this world once you share with them this information.  It felt like magic, and this spell continued for 10 amazing days.

As our final days on the finca approached, the Ubuntu-Blox Press was pieced together one bit at a time, and the beautiful machine finally emerged.  We announced to the community one evening at dinner that we had finished building the Press.  Cheers and applause erupted from the group, as so many of them had witnessed our building project from afar.  Along with our announcement of project completion, our intention was to make it clear to the core community members of Finca Morpho to meet us after lunch the following day to watch a demonstration on how to use the machine, and how to build structures with the Ubuntu-Blox.  We invited the community members to attend the demonstration the following afternoon, and also extended the invitation to all the additional individuals who were visiting the finca at that time (a personal transformation workshop happened to be taking place that week, Metamorphosis, which lead to an influx of people on the finca).

Our final day on the finca had come, and Jo and I were up early (like usual) to give a final test run with the newly built Press.  Of course, we had to make sure everything worked properly before the demonstration.  And much to our unsurprised minds, the machine worked perfectly!  That afternoon we gathered in the Resource Center and awaited the community members to join for the demo.  One by one each community member showed up, and then one by one each person on the finca for the completely separate Metamorphosis workshop also showed up to participate in the demonstration.  Jo and I looked at each other wide-eyed and excited to be sharing this information, this moment, with so many interested individuals from around the world.  We spoke, shared, and taught the community about Ubuntu-Blox, and again were met with cheers and applause once we concluded our presentation.  Listening to community members joke about who was going to get a wall built on their cabin first, and how they were going to build this n’ that… the moment was exciting, humbling, transformative, and exceeded any expectations we could’ve possibly attempted to have in such a magical community.

This is the finished product, an Ubuntu Block

So now what?  Upcycle Santa Fe has, in one aspect, gone full circle, returning to its international inspirations.  With this project we were reminded of the many communities around the world with an already existing interest in building with alternative materials.  These same communities commonly have an issue of plastic crisis and/or housing crisis.  This is how something like an Ubuntu-Blox Press is a two-birds-with-one-stone solution.  Intrigued by the wonder of traveling to new places, and inspired by the great impact made with just one small project, we are again committed to international projects.  Our plan is to generate at least one international Ubuntu-Blox Press buildout each year.  Imagining the difference our small team of two can make on this planet by continuing these adventurous work projects fills our hearts with joy.  In summation, we are so proud to announce this annual international project, and we’re really looking forward to planning our next Ubuntu-Blox Press buildout somewhere else in the world.